You might miss the news that the fake Rolex has launched for the very first time a ‘Pepsi’ GMT-Master II in ‘Oystersteel’. Yes, a two-color red and blue Cerachrom bezel insert, WITH a Jubilee bracelet. The five-link Jubilee bracelet is also made from Oystersteel and characterized as an ‘Oysterclasp’, which has access for 5mm of adjustment. It’s also worth noting that this is the first time we’ve seen a Jubilee bracelet on a sports Rolex in modern times. 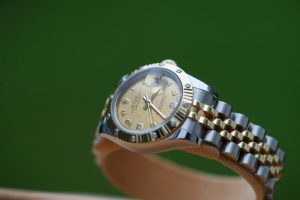 The Oyster case also gained some changes and has been redesigned. It’s noticeably different in comparison to the GMT-Master II BLNR (Batman), which is also still in production. Aesthetics aside, the new Pepsi GMT also features a completely new generation movement — the 3285 caliber, which features a beefed-up 70-hour power reserve.
Another small but noteworthy detail is the extra Rolex crown on the dial, which you’ll notice at six o’clock, between ‘Swiss’ and ‘Made’. This appears to be on all new 2018 models. They are small touches like these that help collectors distinguish between different references at the first view, and are often used historically as markers of a transitional period.
Rumors were going wild as to exactly what GMT configuration we’d see from the replica Rolex this year and really went crazy when teaser videos showing the makings of a Jubilee bracelet were released. Normally, I suppose it’s safe to say the watch community has been crying out for another steel GMT with either the Coke or Pepsi bezel inserts. Even though the Rolex provided the Pepsi bezel in white gold, the price of entry was far too high.
If early feedback from the public is anything to go by, then Pepsi is a hit. It’s obvious that a lot of work has gone into the design and execution of the Pepsi — the Rolex replica put in a lot of effort when making this vintage-inspired piece. As a matter of fact, this unique model has 10 patents, from the clasp to the movement.